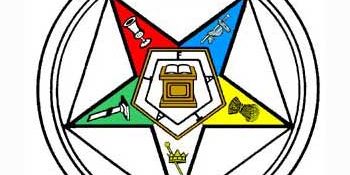 The Order of the Eastern Star is a Masonic organization which allows women to participate in some Masonic-related activities. Women are specifically forbidden to join regular Masonic Lodge. There are about half a million members of the Order throughout the world.
The logo for the General Grand Chapter includes an inverted pentagram. The five points of the pentagram represent the five Biblical heroines Adah, Ruth, Esther, Martha, and Electa.