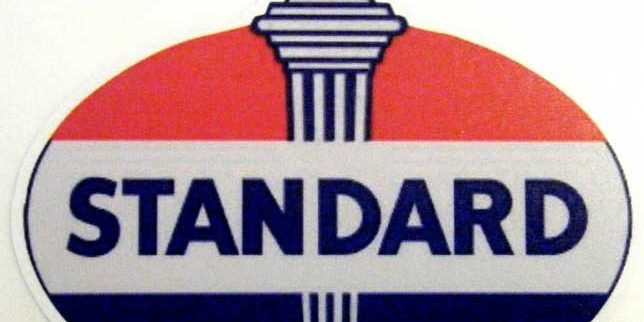 JD Rockefeller’s Standard Oil features and eternal flame. For some researchers, fire is a symbol of Lucifer, the bringer of light.
In 1911, Standard Oil was broken up into smaller companies who soon grew even larger making Rockefeller richer.
In masonry, the first three degrees are called the Blue Lodge while Royal Arch Masonry is called the Red Lodge.

Official explanation for the flames and colors.

The colors of this logo are red, white and blue. These colors, the three colors of the U.S. flag, served to show Standard Oil’s patriotism. The large torch in the middle served a dual role. A torch requires fuel to burn, and the makers of the logo sought to point out that American needed fuel to thrive and grow. The torch also served as a symbol of lighting the path to the future, which would require fuel as well.